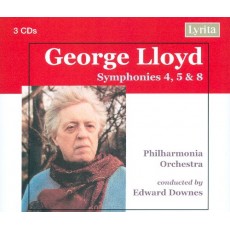 Committed fans of twentieth century British orchestral music usually make their way to the symphonies of George Lloyd. Overshadowed by names like Elgar and Vaughan Williams (and even Walton, Rubbra, etc.), Lloyd was nearly completely ignored for most of his career, and at one point he turned to growing mushrooms for a living. Certainly his neglect was partly due to his heart-on-the-sleeve melodies, capacious forms, and relentlessly consonant harmonies, all of which marked his as the most archly conservative of the British symphonists. But as this three-disc set coupling his Fourth, Fifth, and Eighth symphonies proves, Lloyd's musical conservatism didn't stand in the way of expressivity. Indeed, the directness of his expression coupled with the catchiness of his themes makes his music almost irresistible to listeners fed up with arid atonality and eviscerated serialism. Each symphony here is gigantic in scale -- the four-movement Fourth lasts an hour, the five-movement Fifth nearly an hour, and the three-movement Eighth three quarters of an hour -- and each stands a good chance of thrilling those who have worked their way through the English symphonic canon looking for a melodically appealing composer as brightly colorful as Bantock, structurally spacious as Bax, and harmonically advanced as Stanford. Downes appears to know and love Lloyd's music and the Philharmonia Orchestra gives him performances of persuasive professionalism. Lyrita's early '80s stereo recordings sound wonderfully clear and open in this 2007 release.