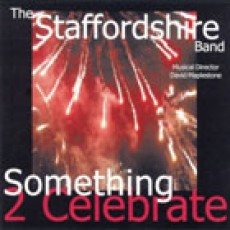 The Staffordshire Band under the direction of David Maplestone are the 2002 First Section National Champions of Great Britain, and all of us who had the pleasure (it was a pleasure, even at 11.30pm on very long Sunday night in Torquay!) can attest to the fact that they are a fine band indeed, and one with bags of talent and stamina!

That win put the icing on the proverbial contesting cake for the band, as this year they not only won the "big one" at Torquay, but were also fine winners of the Regional title and did very well wherever they went on their contest travels. They will be promoted to the Championship Section for 2003 in the Midlands, and on the form displayed both on the stage and on this CD they will be a force to be reckoned with.

The CD was produced prior to their late, late win in Torquay and so we don't get the chance to hear once more their very fine interpretation of the winning test piece by Philip Wilby, but they more than make up for that with 14 tracks that give the band and players the opportunity to showcase their talents to the full.

Much of the credit for the bands success during 2002 must go to David Maplestone, the bands MD who has brought a vitality to their playing which mirrors his musical direction. Nearly a decade ago, Elgar Howarth identified him as a talent to watch out for, but it has taken some time for him to come back to the fore after that breathtaking start and he has returned as a much more mature and thoughtful conductor. Much of the bravura remains, but there is talent aplenty to match it and the band has been the beneficiaries.

The choices show a band who are capable of changing style and mood with aplomb, and who produce a full and rounded sound. There are "rough edges" in places, especially when the volume knob is turned up full and the upper register can sound a bit strident in places, but overall there is plenty of quality with the three soloists in particular very good indeed. There is also a welcome choice of repertoire away from the tried and tested and so we get to hear pieces from composers for brass who we at 4BR haven't had the pleasure too often before. More should be heard of the likes of David Morgan and Wesley Kendrick.

"Mars" from the "Planets Suite" has just the right amount of menace, whilst there is some lovely playing in the David Morgan arrangement of the plainsong "Veni, Creator Spiritus". "Ravenswood" gives the band a chance to flex its muscular attributes, before another neat balanced bit of "traditional" band playing in "Crimond".

Paul White has been regarded as a fine cornet talent for some time and he provides ample evidence with a whip through "Carnival de Venise" a pot boiler that never loses it's ability to satisfy. There are also two neat examples of thoughtful programming in the shape of "Con te Partir" and "El Relicario" just a touch different and all the better for it.

The band won the Regional title in 2002 playing George Lloyd's underrated "Royal Parks" and once more the band give a thoughtful account of the second movement, whilst there is some classy playing evident in both "Folk Dances" and "Gladiator". Jo Todd produces an excellent flugel tone and style in "None but the Weary Heart" and Kate Williams does the same on John Gollands "Peace". The band finish off with two very different works in the shape of "Just My Imagination" and "Meditation The New Covenant" by James Curnow. From the Temptations to spiritual fulfilment different eh?

If you are going to celebrate, then you may as well do it in some style, and this release from the Staffordshire Band more than lives up to the title on the sleeve. 2002 has been a very good year for a hard working band and if they carry on the form they have shown on both the contest stage and on this CD then 2003 shouldn't disappoint also.