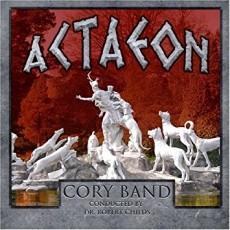 This recording showcases Cory Band in an eclectic mix of music based on journeys, myths and legends. Designed as a follow-up to the successful recording The Promised Land, Actaeon consists of world premiere recordings by significant British composers. The music is varied in style, from the dramatic and violent depiction of Actaeon’s death to the beautiful inner movements of George Lloyd’s November Journeys inspired by English cathedrals. The inclusion of Kenneth Downie’s Visions of Gerontius has been eagerly awaited since Cory Band gave the winning performance of the work at the 2007 British Open Brass Band Championship in Symphony Hall, Birmingham