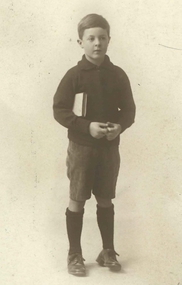 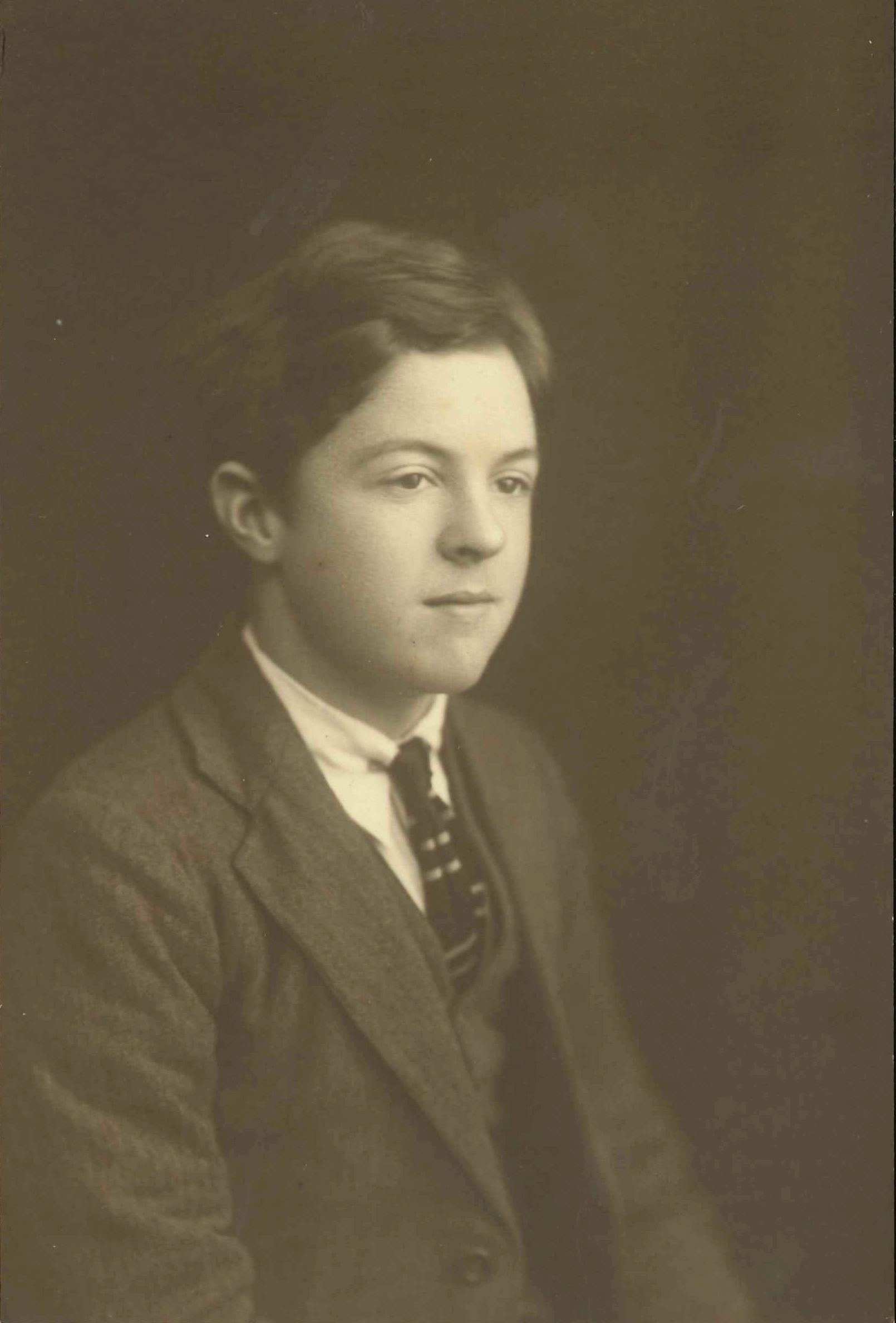 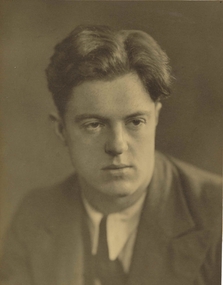 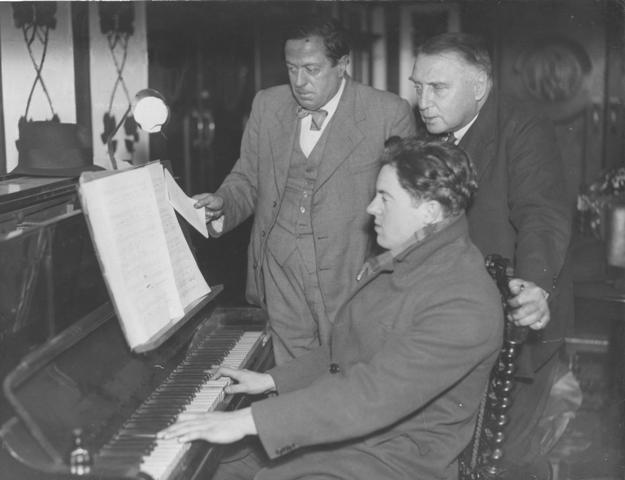 George Lloyd with his father William, and producer Walter Barnes. The Lyceum 1934

Born in St Ives, Cornwall, of part Welsh, part American and part Irish ancestry, George Lloyd grew up in a very musical family. His father, William A. C. Lloyd, was an accomplished flautist and Italian opera aficionado, who wrote the first English biography of Bellini. He had been born in Rome but returned to England on the death of his father who was a retired naval officer. George Lloyd's mother, Constance Lloyd (née Rawson) played the violin, viola and piano. Both parents were leading members of the St Ives Arts Club, and their house was a regular weekly venue for chamber performances, so that the young composer was always surrounded by music. Even his grandmother, the American painter Frances (Fanny) Powell, had been an opera singer, although she became better known as an early pioneer of the St Ives artists' colony. 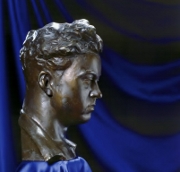 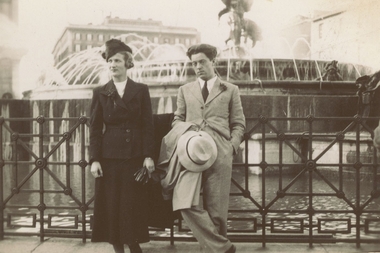 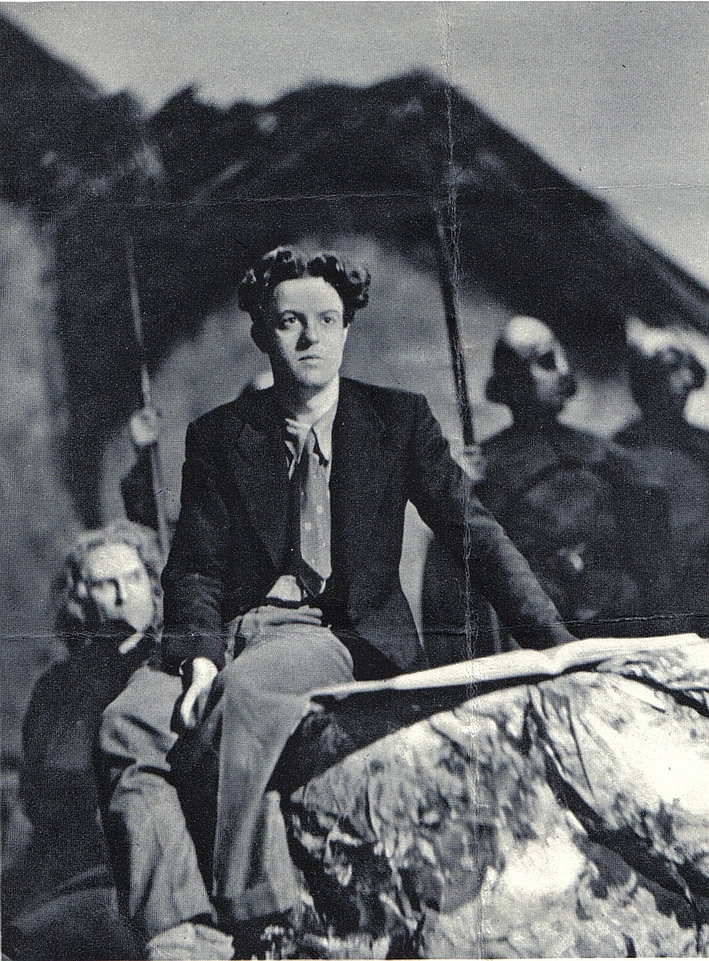 George Lloyd showed his talent as a composer early. He began composing at the age of 9, embarking on serious study at the age of 14, although he was mainly educated at home because of recurrent bouts of rheumatic fever. Lloyd was trained in the dramatic aspects of opera by his father, who would regularly give him scenes from English plays to set to music. Later he studied violin with Albert Sammons, as well as composition with Frank Kitson and Harry Farjeon. He was a student at Trinity College, London.

Lloyd’s first symphony, written at the age of 19, was premiered in 1932 by the Penzance Orchestral Society and was performed again in 1933 by the Bournemouth Municipal Orchestra, with the composer conducting on both occasions. A second symphony had its premiere in 1935 and was soon followed by a third. George Lloyd and his father William formed The New English Opera Company in 1935 with the intention of establishing a new school of English opera. Lloyd's first opera Iernin made his reputation in 1935, and he attracted the attention and approval of Rutland Boughton, Thomas Beecham, John Ireland, Ralph Vaughan Williams, and George Christie at Glyndebourne. He consolidated his reputation with The Serf which was staged at Covent Garden in 1938. 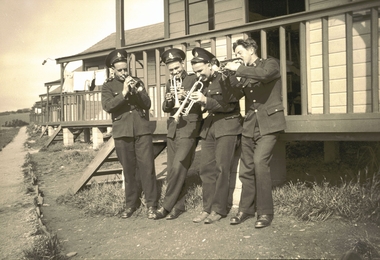 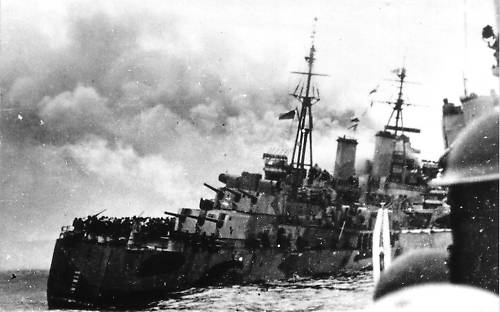 HMS Trinidad on fire and sinking, May 1942 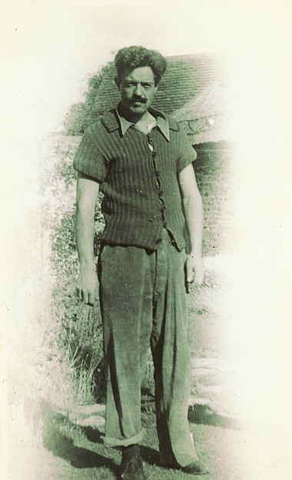 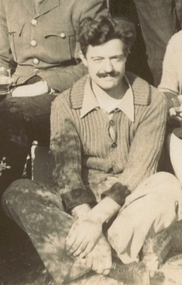 Lloyd’s musical career was interrupted by World War II. He served with the Royal Marines as a Bandsman on board the cruiser HMS Trinidad on Arctic convoys. He was one of the Bandsmen manning the Transmitting Station, situated deep in the hull of the ship. In 1942, during an engagement, the Trinidad fired a faulty torpedo which travelled in a circular track and hit the ship, fracturing a large fuel oil tank. Many of Lloyd's shipmates were drowned in the fuel oil, and he was the last man to escape from the compartment.

George Lloyd's traumatic experience of the torpedo strike on HMS Trinidad had a profound effect on his mental, physical and emotional health. He spent several months in the Naval Hospital at Newmachar, near Aberdeen, suffering from shellshock (PTSD) which caused an uncontrollable shaking of the limbs. These symptoms recurred for over 20 years. George acknowledged that he could not have recovered without the care and attention of his Swiss wife Nancy (née Juvet). George and Nancy had married in 1937 after a whirlwind romance. After his accident, she was determined that he should regain his health and begin composing again. 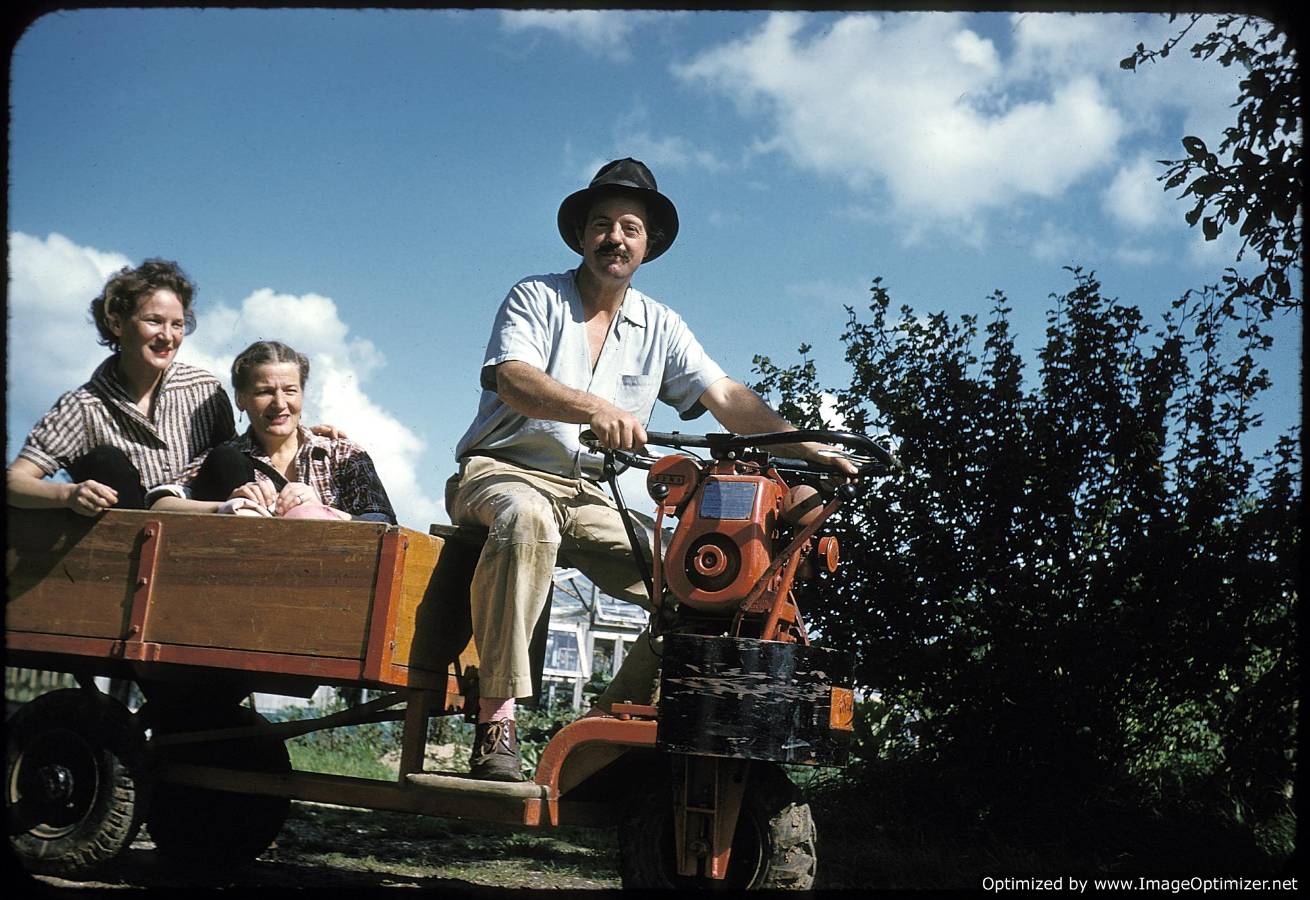 Ryewater Gardens with Nancy and Doll 1965 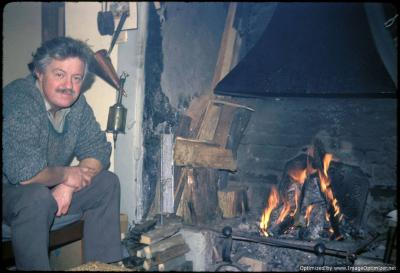 By the fire at Old Keeper's Cottage 1967 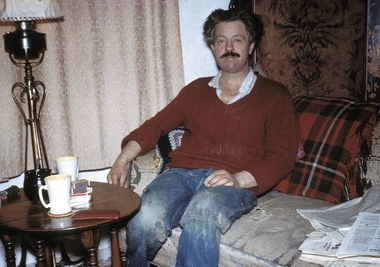 In 1945 Nancy took her husband to Switzerland and introduced a regime of diet, exercise and alternative therapies to aid his recovery. By 1947 Lloyd had resumed composition and written two symphonies, the Fourth and Fifth. In 1949 he was commissioned to write the opera John Socman for the 1951 Festival of Britain and returned to England to take up full-time residence in Dorset. In 1951 however, Lloyd's health deteriorated further, and he abandoned his full-time musical career.

For the next 20 years, in addition to intermittent composition, he was a market gardener and grew mushrooms and carnations. He composed regularly from 4:30 AM to 7:30 AM, before each working day. During this period, he continued to write in a tonal, melodic style, contrary to the prevailing modernist ideology of the avant-garde. This led to difficulties obtaining performances of his music. He recalled:

"I sent scores off to the BBC. They came back, usually without comment. I never wrote 12-tone music because I didn't like the theory. I studied the blessed thing in the early 1930s and thought it was a cock-eyed idea that produced horrible sounds. It made composers forget how to sing." Obituary: George Lloyd The Times 6 July 1998

Lloyd’s reputation suffered because of this unwillingness to change his style. Nevertheless, his champions included the conductors Sir Charles Groves and Sir Edward Downes, as well as the virtuoso pianist John Ogdon, who studied composition with Lloyd and for whom Lloyd wrote his first piano concerto (‘Scapegoat’) and other works for solo piano. 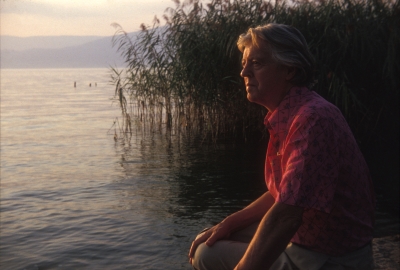 In 1972 Lloyd sold his market garden business and moved to London to "pick up the pieces of my musical life" as he put it. So commenced an extraordinary and productive Indian summer. He began to receive greater attention, and a number of his scores were accepted for broadcast by the BBC. He developed a strong relationship with the BBC Philharmonic Orchestra, which recorded and broadcast seven of his symphonies, including Symphony No. 8 in 1977, and his Symphony No. 6 which received a performance at The Proms in 1981.

Lloyd was an early adopter of digital technology, and established his own recording, production, publishing and distribution company, Albany Records. The label made 22 CD recordings in all, on which Lloyd conducted his own music, working with ensembles such as the Albany Symphony Orchestra, the Philharmonia, the London Symphony Orchestra and the BBC Philharmonic. Lloyd was for two seasons Principal Conductor of the Albany Symphony Orchestra in New York State, where he frequently conducted his own symphonies and works by 20th century American composers. He was also a guest conductor at the Hong Kong Philharmonic Orchestra, which premiered a number of his works. The US premiere of Lloyd’s Seventh Symphony was given by the Chicago Symphony Orchestra under Neeme Jarvi. Lloyd conducted 25 CD recordings in all, including two of his operas, in addition to works recorded by Sir Edward Downes and others. Only two orchestral works and his opera, The Serf, remained unrecorded at the time of his death. His works for brass band also found favour, being regularly adopted as test pieces in brass band contests throughout the UK and Europe.

In 1972 Lloyd sold his market garden business and moved to London to "pick up the pieces of my musical life" as he put it, and began an extraordinary and productive Indian summer. He began to receive greater attention and a number of his scores were accepted for broadcast by the BBC. He developed a strong relationship with the BBC Philharmonic Orchestra, which recorded and broadcast seven of his symphonies, including Symphony No. 8 in 1977, and his Symphony No. 6 received a performance at The Proms in 1981.

Lloyd had heart trouble toward the end of his life. He recovered sufficiently to complete a setting of the Requiem Mass three weeks before he died, in London on 3 July 1998 at the age of 85. Lloyd inscribed the score, his last composition, "Written in memory of Diana, Princess of Wales". His wife Nancy survived him by 18 months, and the couple had no children.

After his death Lloyd was twice Composer of the Week on Radio 3, and the 2013 BBC Proms programme included a performance of his Requiem, and his H.M.S. Trinidad March was played on the occasion of the Last Night. Also in 2013, the British Library acquired all of George Lloyd's autograph music manuscripts, sketches and draft scores in recognition of their historic importance for British musical life.

The George Lloyd Archive and Music Library is now administered by Lloyd’s nephew, William Lloyd, who also worked as the composer’s business manager, executive producer and record distributor for the last 10 years of George’s life.