share:facebook}This e-mail contains graphics, if you don't see them »view it online.

“This is a lovely opera with something that most of us despaired of finding in a twentieth-century work - tunes that stay in the memory.”
Fanfare

“ I do find that the heart goes out to this opera. “
Gramophone

"Lloyd showed that rarest of all qualities in a British composer, an almost unerring perception of what the stage requires .. an extraordinary achievement."
The Times

Not staged since its première in 1934 and short London run in 1935, George Lloyd’s Iernin tells the story of a maiden turned to stone by puritanical priests, only to reawaken hundreds of years later and ensnare the heart of a betrothed Cornish nobleman. This is set against the backdrop of a soon to be occupied Cornwall and the struggle of its leader and people to retain their independence from the Saxon overlords. It is a story about the defence of the weak and society’s fear of change, but above all our fear of and fascination with the unknown. Written during the rise of German National Socialism and alongside the abdication of Edward VIII, the story also strikes some fortuitous chords with one of the most dramatic periods in British history, a period which would change George Lloyd’s life forever.

Surrey Opera now brings a fully staged Centenary production of Iernin to Croydon, and then home to Cornwall, where it was conceived and first performed. Written when the Cornish composer was still in his teens, Iernin is based on a Celtic legend inspired by the Nine Maidens stone circle near Penzance. Lloyd’s music dramatically evokes the mystical world of Iernin as well as the very human struggle of love and loyalty versus desire. This new production will be performed using Lloyd’s original scoring.

CROYDON: Trinity School Concert Hall/Theatre, Croydon: Thu 24th - Sat 26th October 2013 t 7.30pm.
Tickets £20 and £18 Balcony. £2 off for concessions.
May be reserved by email to our This email address is being protected from spambots. You need JavaScript enabled to view it., telephone 020 8660 5760 or purchased online

The Lloyd Requiem at the Proms attracted a number of surprisingly hostile but uninformative reviews, to which, naturally, we prefer not to give any currency. The following is a selection of the more open-minded comments:

Last Night Review:     Do Re Mi Fa So La Ti Do Music Blog

If you are thinking about going to Truro Cathedral on 23 November, you may like to go to the Seminar in TRURO SCHOOL CHAPEL Saturday 5 October 9.30 am – 2.00 pm

Professor Kenneth Kleszynski -  Professor of Music, University of Portland, Oregon.  Professor Kleszynski was at the dress rehearsal and première of A Symphonic Mass, and visited George Lloyd beforehand.  He will talk about what was discussed, what was learned from Lloyd’s rehearsal comments, and important musical elements within the piece itself.

Bruce Reader is a classical music reviewer and author of Diary of a Friendship.  Bruce’s book is an account of his friendship with George Lloyd and he will give an overview of Lloyd’s music with some background.

Janet Axten - Heritage Manager, St Ives Archive. George Lloyd was born in St Ives on 28 June 1913.  Janet will set George Lloyd and his family within the context of the St Ives of the early twentieth century, and of St Eia where he was born.

Christopher Gray - Music Director, Three Spires Singers will lead some singing from A Symphonic Mass, an opportunity for everyone to participate in this beautiful music.

Strange Storms and Symphonies:
a film about George Lloyd and his music (duration 40 mins)

Finally, If you would like to listen to the BBC Singers singing the Lloyd Requiem, it is available here: PIPEDREAMS

Thank you once again for your interest in the George Lloyd Society.

PS  Please support the revival of Iernin!  As John Ireland pointed out in 1935, this is a remarkable work:

" Having heard the opera twice, I have no hesitation in saying that it is quite the most remarkable work produced by a British composer during the last 20 years, whether in the form of opera or other musical forms. As a composition teacher of long experience, it is at once evident to me that the composer of this work has a unique talent, which one may well suppose to be genius, sparing as one must be in ones use of that word. There is no doubt at all that this truly remarkable work will be accepted, wherever it is heard, for what it actually is—a great opera, and a splendid piece of music."  John Ireland 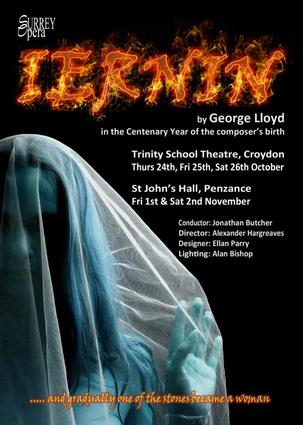 If you prefer not to receive these occasional Newsletters, you can » unsubscribe here: